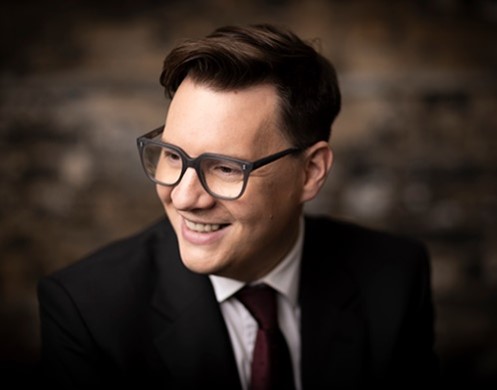 David Bates looks forward to making his debut with the Münchner Symphoniker at the Isarphilharmonie Munich in an interesting programme of Mozart symphonies No. 25 and No. 40 paired with...

David Bates makes his conducting debut with the Orchestra of the Age of Enlightenment in Handel’s Alcina at Glyndebourne and will return to Alcina during the 2022-23 season at both Staatsoper...

Baroque specialist David Bates conducts the orchestra of the Komische Oper with juice and vehemence.

A graduate of the Royal Academy of Music and of the Schola Cantorum Basiliensis, David Bates initially embarked on a professional singing career before turning to directing/conducting. He founded La Nuova Musica in 2007, a vocal and instrumental ensemble dedicated to the music of the Baroque and Classical periods. Their most recent highlight was a semi-staged performance of Purcell Dido and Aeneas at the 2022 BBC Proms, described as a superbly evocative night in The Times and a highly shaped, highly articulated performance, a musical tour de force that filled the hall in Opera Today.

Recent opera highlights include his debut with Komische Oper Berlin, conducting a new production by Damiano Michieletto of Gluck Orfeo ed Euridice and a revival of the very successful production directed by Elisabeth Stöppler of Handel Il Trionfo del Tempo…

Recent opera highlights include his debut with Komische Oper Berlin, conducting a new production by Damiano Michieletto of Gluck Orfeo ed Euridice and a revival of the very successful production directed by Elisabeth Stöppler of Handel Il Trionfo del Tempo e del Disinganno for Staatsoper Hannover. He ended the 2021/22 season conducting a performance of Handel Alcina for Glyndebourne Festival with the Orchestra of the Age of Enlightenment.

In the current season he will conduct Alcina at Staastoper Hannover, where he will also conduct a new production of Monteverdi Orfeo; make his debut with Opéra de Rouen Normandie with Handel Serse and end the season with a new production of Handel Saul at the Komische Oper Berlin. He will also explore Mozart and Beethoven with the Munich Symphony Orchestra and, continuing his residency at the Wigmore Hall with La Nuova Musica, conduct Monteverdi madrigals and motets.

Directing from the harpsichord, David’s previous opera productions have included Rinaldo for Glyndebourne on Tour; Cesti Orontea at the Innsbrucker Festwochen; Cavalli La Calisto for Cincinnati Opera; Iphigénie en Tauride at the Teatro Nacional de São Carlos in Lisbon and Vivaldi Farnace with the Tony Award-winning theatre director Garry Hynes at the Spoleto Festival in the United States.

In 2015, David Bates and La Nuova Musica started their series of concert performances of Handel for the London Handel Festival. So far, they have completed Acis and Galatea, Berenice, Il Trionfo del Tempo e del Disinganno, Il Duello Amoroso, Apollo e Dafne, Orlando and Alcina. Together they have also made award-winning recordings for Pentatone and Harmonia Mundi. Gluck’s Orfeo ed Euridice on Pentatone, featuring Iestyn Davies and Sophie Bevan being shortlisted for a 2020 Gramophone Award and their CDs for Harmonia Mundi having received ‘Le choix de France Musique’ and Gramophone ‘Editor’s Choice’.